8 Facts You Must Know About Ayurveda

Ayurveda is the oldest system of medicine but it is still struggling to achieve the faith of patients as there are several myths and misconceptions prevalent among them related to Ayurveda.

Let’s check 8 Facts You Must Know About Ayurveda

Why is this so? If you transfer a vessel completely filled with water from one person to another and so on, it is likely that water spills out before reaching the other person’s hands. Likewise, the wisdom of Ayurveda has been propagated throughout the world and the spillage during this transfer of knowledge from one person to the other has been in the form of misconceptions and fallacies.

This article aims to throw light on the true facts and debunk the wrong notions surrounding practice of Ayurveda.

Common Misconceptions Associated With Ayurveda:(8 Facts You Must Know About Ayurveda) 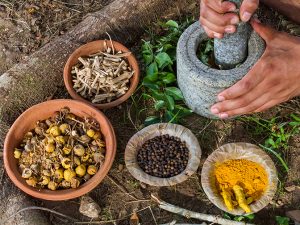 Our body is made up of many systems, but that does not mean that every system needs a different doctor. One of my patients had several problems like acidity, knee joint pain, and eczema. He approached three different specialists: Orthopedician, gastroenterologist,  and dermatologist.

IDENTIFYING THE ROOT CAUSE – Ayurveda does not require you to go through too many expensive tests. Moreover, each specialist in English medicine will prescribe his own medication. Ultimately as the saying goes; Too many cooks spoil the broth, the result is side effects.

Identifying the root cause can sort out so many related ailments. I will prescribe to the patient an Ayurvedic medicine than can effectively bring down his elevated Vata Level which was the root cause. Consequently, his digestion will improve, the joint pains will get better or disappear, and the dryness over his skin will vanish. Thus, different doctors are not necessarily required for treating a single body.

Misconception & Myth 2 – Unlike Medicines, There Are No Specialists In Ayurveda Such As A Gastroenterologist, Dermatologist, Cardiologist etc..

Balachikitsa – Care of a woman before and after Pregnancy, Post natal Baby care

Salya Chikitsa – Surgery. Sushruta was the 1st Ayurvedic surgeon who performed Rhinoplasty, Retinal surgery and described various simple to complex surgical operations using different instruments and devices. Almost all of these instruments are used even today in hospitals.

Visha Chikitsa – Toxicology. This branch understands toxins from Vegetables, Minerals, and from animal origins. The concept of pollution and study of water available in certain regions are studied in-depth. Also seasonal variations and their effects on foods are studied.

Rasayana Chikitsa – Rejuvenation therapy. It deals with prevention of diseases and the promotion of a long, disease free life. Beauty of the body and mind are also a part of the study of Rasayana Chikitsa.

Misconception & Myth 3 – Ayurvedic Medicine Does Not Require A Doctor

PRAKRUTIK TREATMENT – Ayurvedic treatment looks simple as it has come down the ages. But understand, it is a deeply embedded science and philosophy that is time tested, proved and is completely documented in the most scientific manner.

People often go around advising others of medication that cured them. They advice others to avoid consultation assuming they know everything. Such people forget that Ayurvedic medicine is given based on Prakriti (body constitution) of a person.

Ayurvedic treatment is decided based on a PRAKRUTIK evaluation of the person and his current VIKRUTIK constitution. Without proper consultation of a qualified Ayurvedic doctor, this is not possible.

Misconception & Myth 4 – Ayurveda Is All About Home Remedies

HOME REMEDY IS NOT THE ANSWER – If home remedies could cure diseases, there would not have been the need for doctors.

Home remedies can help you to deal with small one off ailments that occur once in a while like for eg. If you had a spicy meal the previous night and you get up in the morning only to have a burning throat, you can try a home remedy for it. But, if the acidity persists and has become a part of your daily life, then it is time to stop taking it. You will need to necessarily consult with an Ayurvedic doctor.

Misconception & Myth 5 – Ayurvedic Medicines Are Free From Side Effects

AVOID SELF MEDICATION – Anything, any object or thing that has an effect is bound to have side effects. If you eat semi-cooked food it can give you a stomach ache. When food—if not taken properly, it can cause side effects. Ayurvedic medicines are no different.

People consume Ayurvedic medicines on the basis of articles over internet, books etc. as they believe that they would not have adverse effects. This is not true. It is not only about the consumption of medicines but also about the effective management of the remnants of the medicine, the management of the body post medication through rejuvenation therapies and increasing immunity to avoid recurrence of the same ailment.

Misconception & Myth 6 – Ayurvedic Medicine Does Not Require A Doctor

This belief holds back people from approaching Ayurvedic doctors. In fact, this belief proves to be expensive to patients as they invariable turn to Ayurveda when they have been wrongly experimented on with various medications.

This complication makes Ayurvedic treatment take longer as it has to deal with the complication first and then address the primary cause of the ailment.

Your Doctor Can Advise The Most Effective Medication – An ailment is because of a blocked channel within the body. Identifying the cause of blockage can help relieve the suffering and the ailment can be healed. Its not obviously what you feel should be the problem. For example, if you are constipated and you resort to Ayurvedic laxative at bedtime, believe me, the next morning your bowel will be clean. Here, its the kind of laxative identified with the cause of blockage that works for you. Any Ayurvedic laxative cannot do the job.

AYURVEDA IS ALL ABOUT ENERGY IN FOODS – Sometimes, simple dietary changes can heal. Ayurveda is not only about medicine all the time. Ayurveda believes if you take proper diet (Pathya), there will not be the need for treatment.

AYURVEDA IS ALL ABOUT ENERGY IN FOODS – Sometimes, simple dietary changes can heal. Ayurveda is not only about medicine all the time. Ayurveda believes if you take proper diet (Pathya), there will not be the need for treatment.

Even modern medicine doctors would advise stopping fatty and greasy food in a patient of hyperlipidemia (high cholesterol level), and controlled sugar intake in Diabetes. So, why is Ayurvedic doctor blamed?

Frankly, Ayurveda understands foods better as it studies the compatibility of certain foods that can go well with your current altered state of constitution. This way, your food when completely assimilated helps you to gain strength, leave little toxins in the body and helps you to recover faster.

EMPOWERING THE BODY TO HEAL – Ayurvedic treatment is not about an oil massage in a spa. Its not actually restricted to an oil massage. There are 18 different types of detoxification and rejuvenating therapies called ‘Panchakarma’. Its all about detoxification. The right detoxification through a scientifically planned therapeutic interventions helps in eliminating the cause of the ailments.

Blockages are identified and then relevant therapies are administered to release these blockages to empower the body to heal faster.

Unfortunately, spas use Herbal and Ayurveda Prefixes to attract customers and hence an erroneous message has been spread that Ayurveda is like an oil massage or spa.

The spa uses aromatic oils which aim in body relaxation, whereas oils used in Ayurveda have medicinal properties. In addition to relaxation as well as rejuvenation, they serve the primary purpose of detoxification of the body and mind.

A meritorious alumna of the prestigious RA Poddar Ayurvedic College with profound spiritual understanding. She is trained in Nadi vidya by a strict guru-shishya lineage and has clinical experience with more than 15 years. An excellent orator who has been invited to various national and international platforms that empower audiences with the knowledge of Āyurveda. Dr. Rushalli Nair is the first-ever lady Vaidya who has been invited to Swaminarayan temple to offer her services to Sadhvis and devotees.